According to Zacks, analysts expect that International Game Technology will report full-year sales of $4.15 billion for the current year, with estimates ranging from $4.04 billion to $4.26 billion. For the next year, analysts forecast that the company will post sales of $4.28 billion, with estimates ranging from $4.16 billion to $4.47 billion. Zacks Investment Research’s sales averages are a mean average based on a survey of sell-side research firms that cover International Game Technology.

International Game Technology (NYSE:IGT – Get Rating) last released its quarterly earnings data on Tuesday, March 1st. The company reported $0.09 EPS for the quarter, missing analysts’ consensus estimates of $0.39 by ($0.30). The company had revenue of $1.05 billion during the quarter, compared to the consensus estimate of $1.02 billion. International Game Technology had a net margin of 11.78% and a return on equity of 3.59%.

IGT has been the subject of a number of recent analyst reports. StockNews.com upgraded International Game Technology from a “hold” rating to a “buy” rating in a report on Friday, April 8th. Credit Suisse Group increased their price target on International Game Technology from $59.00 to $63.00 and gave the stock an “outperform” rating in a report on Wednesday, March 2nd. One analyst has rated the stock with a hold rating and five have issued a buy rating to the stock. Based on data from MarketBeat, the company presently has a consensus rating of “Buy” and an average target price of $43.20.

The company also recently disclosed a quarterly dividend, which was paid on Tuesday, March 29th. Stockholders of record on Tuesday, March 15th were given a dividend of $0.20 per share. The ex-dividend date was Monday, March 14th. This represents a $0.80 annualized dividend and a dividend yield of 3.25%. International Game Technology’s dividend payout ratio is currently 34.33%.

About International Game Technology (Get Rating) 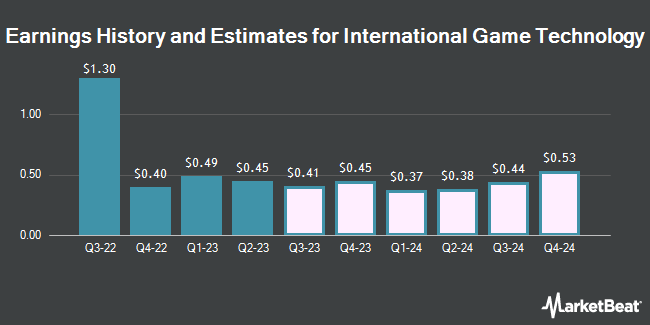